Dan and Cixi stepped through the inner door, and into a world of gold. It was all around them, stretching overhead to form a sky of yellow and orange flowers growing on vines that spiralled into the mesh walls. High above shafts of sunlight managed to make it through the thick layer of flowers, shining off their petals in glittering shades that looked like the sparkle of precious metals or gems. No flowers should shine so bright, and indeed none would have, were it not for the creatures tending to them. Bronze shapes punctuated the yellow, shaped a little like birds but with dark wings which made a leathery sound as they flapped from one wall to another around the giant enclosure. Fae, the entire reason for the existence of this place, and for the pair’s visit.

Dan looked down at Cixi and the neatly suited goblin looked back up, dark eyes and lightly furred face holding a certain nervous excitement. Cixi’s paws formed a pattern, signing the question: Ready?

In her initial, elementary incarnation, Jackin was far more of a blank slate. We knew she was an elf, was young, and we knew she had a prosthetic arm (even if we weren’t sure why). On the cusp of adulthood, she was fresh faced and impressionable, responding to events in the story impulsively, very much at the mercy of forces around her. 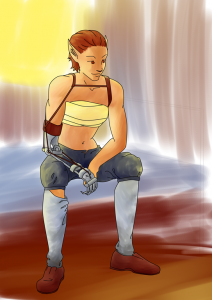 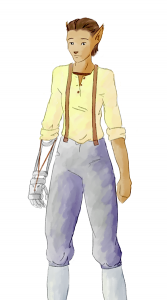 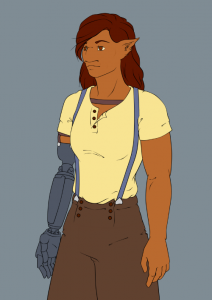 After several iterations of the script, it was clear that this innocent Jackin no longer made sense. Her environment is harsh, and although she is young she’s been through significant trauma (finally, her prosthetic arm got a backstory). Gradually she grew older, more cynical, more wary. She’s a young woman who’s known hunger, who’s lost family and friends, and who knows that if something seems too good to be true than it probably is.

These changes in her character are reflected in her appearance. Her face is lined, her hair tangled, her shoulders broad from hard work. There are aesthetic changes too – her nose is broader and more feline, her skin darker, and there’s (although you can’t see it in these pictures) a tail. As the appearance of other races such as dwarves became more animalistic, elves had to as well.

As the player character, Jackin will go on changing and evolving according to decisions made throughout the story. She may grow more hopeful, more trusting of new opportunities. Or she may grow more cynical, placing faith only in herself and her allies. It’s up to you.

Creating a character who can believably develop in multiple directions has been a challenge, but a fascinating one. 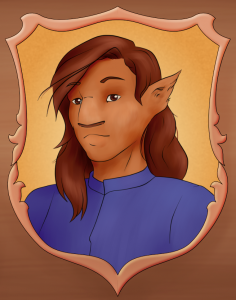 Six month’s progress – pictured above are two animated gifs of Jackin, the first from September last year and the second from last week.

There have been some minor changes to the design of her face and pants, but mostly the quality difference is from a change in lineart and much better animation. Figuring out a character’s ‘idle’ animation, the one that plays all the time, is a real challenge. They need to look alive, but they can’t make any large or sudden movements or the animation becomes distracting. For example, the Jackin on the left is flexing her hand and flicking her tail very obviously, while the Jackin on the right looks far more natural and relaxed.