As you might have seen in a recent Patreon update, we finally have a finished build of our demo available to play on PC and Android (and soon Mac). In the days before MIGW we put that demo, along with art, video, and other goodies, onto 100 custom USBs. If you caught up with Tristian while they were in Melbourne you might have snagged one of these for yourself already. If not, we’ll soon be opening a new donation tier on Patreon so we can send you one in the mail – worldwide! If you just want to play the demo, you can download it from our itch.io page. 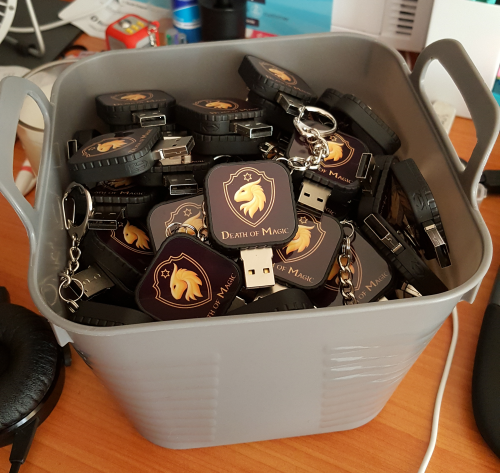 So I’ve made it back alive from Melbourne International Games Week. There were some fantastic panels at GCAP and PAX, I met lots of new people, and got to show off a tech demo of the game to some.

As you can see above, I’ve managed to surmount some major technical hurdles. Characters rigs and animations are made in Live2D, and played out in Unity. (All the art is either a first draft or placeholder right now.) It’s exciting to have something visual to show off after so long working on the background stuff.

There’s lots left to do, but I’m ready to get into it.