As you can see our character sprites are all fully painted, and the process of bringing them to life in Live2D is under way. The difference that a full paint job makes is pretty astounding, as you can see in this close up of Safelor here: 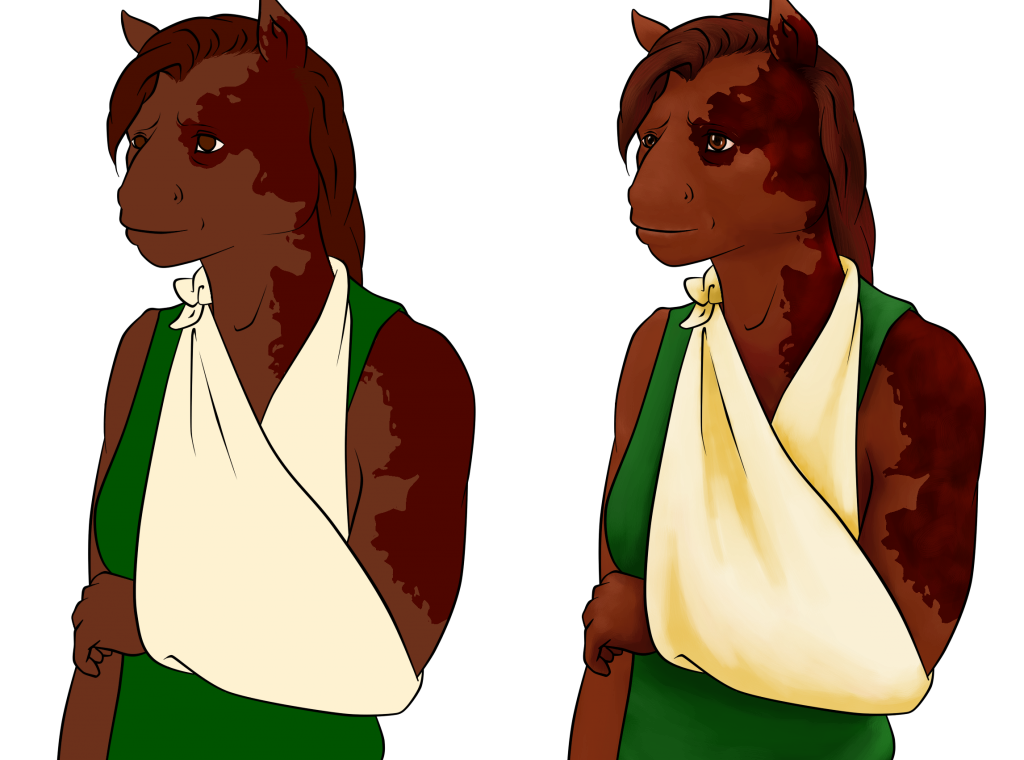 We really can’t wait to show off how they look when they’re moving!

Safelor is a centaur matriarch, acting as leader and guide to her herd. While centaur herds are traditionally made up of a few extended family groups, Safelor has a history of adopting people who she feels needs her protection, regardless of blood relation – or race.

Unlike Garros, Safelor’s appearance has been fairly consistent since her initial conception – a chestnut mare dressed in green. The dark pattern across her face and back is a burn scar from when the Baker’s Lane community home burned down. The bandage and sling on her arm are from injuries sustained in the opening scenes of the game.

[Image: A page from a journal with a drawing of a zeppelin at dock, several coins, and a portrait of a small, fluffy, ferret-like anthro character wearing glasses, a bowtie, and a vest.]

Read moreA Goblin’s Guide to the Empire, page one.

Another character design progression, from a first draft in 2014 to the current version.

Garros is a close friend and ex-lover of Jackin. Like other merfolk, he gets around the city via the canal system, with occasional use of crutches in walking areas. Some merfolk can afford wheelchairs, but they’re a rarity in the outer city.

Designs for Garros have changed a lot since his initial conception, particularly his clothing. His original outfit was purely practical, but it was quickly obvious that it didn’t match his personality. His final design of short sleeves with a tailored waistcoat is casual yet classy, reflecting his level of education and charismatic nature. The kilt is a logistical choice more than a stylistic one – merfolk obviously don’t wear pants, but as most other races do it’s considered more genteel to wear something below the waist.

Swimming around the city via canals while fully dressed causes less problems than you’d think. Merfolk have long since perfected the art of waterproofing fabric. They refuse to explain how.

Take a look at our first teaser trailer for Death of Magic, initially shown at GX Aus.

Let us know what you think in the comments.

Aile shares a moment with a fan.