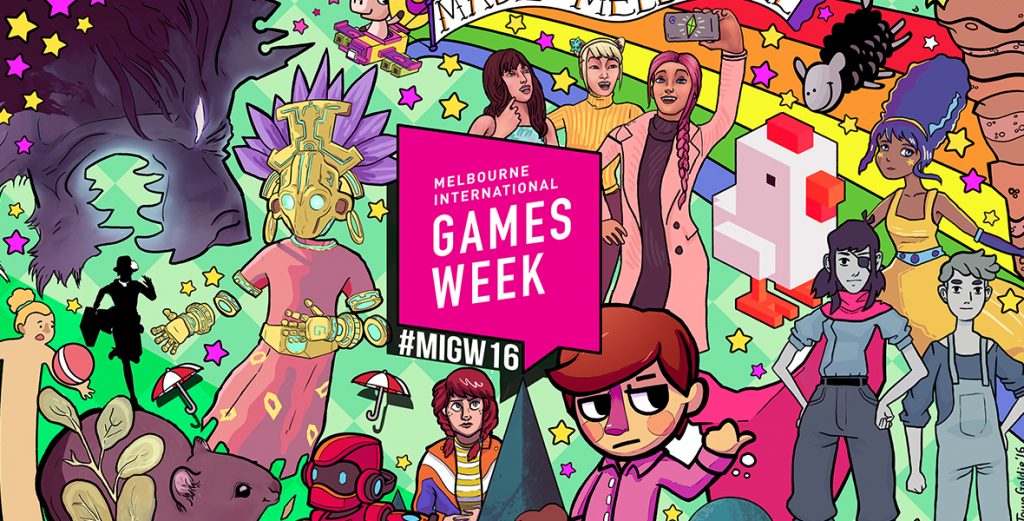 Melbourne International Games week is a collection of events that celebrate both members of the industry and games in general. There are opportunities for professional development as well as more commercial events that let developers interact with their audiences.
While we’ve been to PAX Aus in years gone by, this year we focussed on Unite (showcasing games made with Unity as well as presentations and talks about potential uses of Unity) and GCAP (Game Connect Asia Pacific, which focuses on skills development and education for industry people).

There was a huge amount to see and do at both conferences, and even splitting up to go to talks seperately there was only much we were able to see. Lex was impressed by a Unite talk by Maya Kerr and Ngoc Vu on how to create a hand drawn anime style using 3d models in Unity, as was done in Guilty Gear. My favourite presentation at GCAP was The Art of Making Thing Not Look Terrible, a summary of art principles as they pertain to game design, presented by Simon Boxer and Jacob Janerka. All industry talks are better with party poppers.
Another important talk, while not exactly an enjoyable one, was Mental Health for Game Development by Jennifer Hazel of Checkpoint. There’s a pervasive culture in game dev that if you’re not working until you drop, you’re not really working hard enough. The documentary Indie Game gives you a glimpse of what effect this has on developers. The physical and mental impact of burnout is huge, and particularly important to deal with for developers working alone.
In addition to professional development, GCAP and Unite also host a number of networking events for attendees. Being based in Sydney, away from the main hub of Australian game talent in Melbourne, this was a chance for us to meet and mingle with a new crowd of people. We were able to finally meet face to face with both our composer, Tamara Violet Partridge, and our voice talent director Kevin Powe.

I was also lucky enough to be invited to the Women in Games Lunch hosted by Film Victoria. This event both celebrates women working in games, and allows us a chance to network with colleagues and catch up with friends. This year’s guest speaker was Kim McAuliffe, a game designer from Seattle who’s worked on everything from shooters to The Sims series. Hearing the range of work she’s done on different types of games and in different roles was hugely inspiring.
In regard to networking, I know of one person already who’s managed to land a new job from a contact she met at the lunch, so that’s cool 🙂

After taking some time to recover from MIGW (and GX Santa Clara before that) our next goal is GX Aus in April next year. In the meantime, we’ll be updating our Patreon monthly with new art and fiction, and with progress updates as they happen.
Yes, that’s right, we have a Patreon! Feel free to share it around. Even if you aren’t able to support financially, getting the word out is a huge help.