Item 1:
A page of a waterlogged journal

Summer 23, 1711
Herbert is complaining about being the one to record observations of the subjects. He says it’s too depressing. I’ve reminded him that there aren’t many positions for people in our field, and certainly not any that pay so well, but he just glared at me and muttered that the money wasn’t quite worth it. I don’t see what his problem is. We’re at the forefront of what science can achieve. What we discover here can save thousands of lives. What’s a few rodents for all that?

Item 2:
A letter sent from Firrian to Palista, dated 4th of Autumn 1712

Dear Molly, I hope this letter finds you well. I have made instructions at the bank here for funds to be sent to our account. Fingers crossed that will make some headway in paying off our debt to your mother.
I thank my stars every day that I have been given this opportunity to assist in such a way, but I have my concerns about the ethics of my work. Coaxing wild Achrosic pixies into captivity is not a difficult feat, but the journey back home seems to take a toll on their spirits. By the time we arrive at the facility they are no longer plucky little scamps, but irritable creatures prone to nip at my fingers. It was especially difficult this last trip, as I’d been instructed to purchase several tame pixies, bred and kept as pets. While they still sought comfort by hiding in my clothing, they had grown increasingly nervous and timid. Handing them over to the researchers tore at my heart. I have been assured that they will be well treated, which is some small comfort.
I will be taking a ‘plin to Keack a week from Tuesday. I will hopefully earn enough on this next operation to excuse me from this position. I know that our debts are not yet cleared, but I feel a strong desire to seek a different line of work.
All my love,
Jacinta 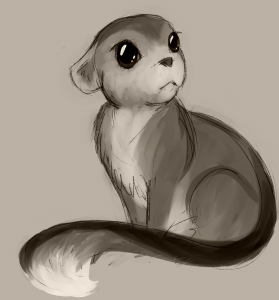 Item 3:
Excerpt from a journal found buried in an attic trunk

Autumn 10th, 1712
I can’t take this anymore. The latest batch of pixies were actually tame – tame! – and had been raised as pets. The wild ones would skitter around in their pens and bare their teeth at us researchers, but these tried to press themselves against the bars as if to get closer, staring at us imploringly. J thinks I’m getting maudlin. I think she’s a monster. I refused to stay to see the experiment today. Bad enough that I’m the one to care for and take notes on the things after it’s done, I don’t have to put myself through seeing the transformation.

Date: 14/2/12, 1300 hours
Experiment number: 104
Subject number: 73
Fuel: 24 unicorns (4 more than prev. exp. – a pattern?)
Runeset: 10th century Basten
Chalk colour: white
Conductive plate: copper
Dimensions: circle of 5m circumference
Notes:
Researchers J, F and A in attendance (H absented self on basis of health). Incantation performed by J
As in prev. exps. null effect was instantaneous. Prior to casting subject was nervous, restless, apparently seeking to elicit response from researchers. Upon casting subject fell momentarily catatonic. In prev. exps. subjects recovered from catatonia by means of extreme violence, attacking their cage with no regard for their own welfare. Subject 73 instead appeared disturbed and confused, moving toward then away from researchers, biting at the cage then breaking off to keen in apparent distress. When approached subject exhibited a similar violence to previous exps, interspersed with repeated keening.
(edited to add:) H reports that the keening has continued unabated for the last six hours.

Item 5:
A page from a waterlogged journal

Winter 18th, 1713
It’s finally happened! After months of these paltry excuses for test subjects – honestly, there’s only so many fauns one can null before one knows all there is to know – a recovery team has brought in an automaton. It is badly damaged, with only one limb remaining and its tail broken to a stub, but there is life in it yet. We are told it was captured at one of the recent altercations in Keack, so it is not one of the crazed brutes that have terrorised us for so long, and should have its programming intact.
Sadly we will have to wait a little while to see what a null field will do to it, as we are having trouble sourcing sufficient fuel for the next experiment. It seems the unicorns we’re bringing in have such weak magic that they are little more than beasts. I imagine Herbert would turn his nose up at that, but he quit the program last week.

This letter will be short, I don’t have much time. I’m sending this off with someone from the cooking staff so they can post it from town, if I send this from the base they’ll censor the hells out of it. You need to get word to mother and father, and to that cousin who moved to the new Sayus colony, I forget their name, tell them to get out right now. They can write to their lawyers to sort out the property details later. It’s not as important as their lives.
We were sent on a recovery to the research lab this morning. There’d been a mayday call, something went wrong and they had to evacuate the island. We weren’t told more than that, no one really knows for sure what goes on over there, although the rumours that I hear sound gruesome. I always thought they were nonsense, but after this morning I’m inclined to believe them. I heard from Din that an auto was captured in Keack, that they were going to do research on it. And Yosa said that Cerine who works in communications said that autos were attacking the island this morning, that’s why we were called.
We arrived at 12:45, barely three hours after the call went out. The kij compass said we were in the right place, right on top of the facility. But brother, there was nothing there. I don’t mean a burning building, or a ruin, or a crater – those are all something. There was nothing. The island was gone. We searched, even sent divers down to look for wreckage, but they went as deep as the tanks would allow and there was only rubble and bent metal. Part of our mer crew stayed to collect what they could find floating on the water, the rest of us came back.
These autos are hell creatures. I can’t up and leave the army but I can warn the rest of you to get away from anywhere that shares a border with Alsvoran territory. Do it soon.
I’m sending this off now. Best of luck.
Gaid